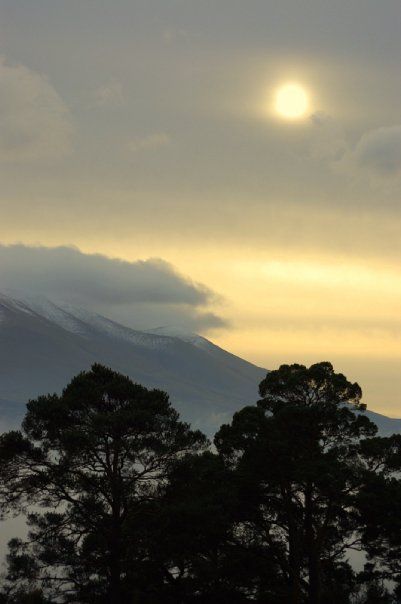 THE SACREDNESS OF LANDSCAPE – Melusine Draco

I would never have the courage to be a mountaineer. And yet I am drawn to the sheer beauty and magnificence of mountains.  They are the first things I see when I awake and the last things I look upon before I go to sleep, the shape of the range often silhouetted against the night sky, regardless of season.  The view of them is never the same two days running and at certain times of the afternoon, the slopes are bathed in a strange, ethereal light that is nothing short of enchanting; the summits are either capped with snow; radiating the mellow tones of sunset; or shimmering in a soft blue haze, or cloaked by low-lying clouds and soft rain.  On rare occasions, there are crystal clear images of a hot summer day when sheep are seen as tiny pin-pricks of white on the far-off slopes and patches of purple heather glow brightly in the sunshine.

The Galtee mountains of Ireland lack the rugged grandeur of the Prescellis, or the formidable bulk of the Black Mountains of Wales but as Aleister Crowley wrote: ‘A mountain skyline is nearly always noble and beautiful, being the result of natural forces acting uniformly and in conformity with law … A high degree of spiritual development, a romantic temperament and a profound knowledge based on experience of mountain conditions are the best safeguards against the insane impulses and hysterical errors which overwhelm the average man.’

Crowley developed his own love of mountains while a schoolboy scrambling among the rugged peaks of Wales, Scotland and the Lake District. ‘My happiest moments were when I was alone on the mountains; but there is no evidence that this pleasure in anyway derived from mysticism.  The beauty of form and colour, the physical exhilaration of exercise, and the mental stimulation of finding one’s way in difficult country, formed the sole elements of my rapture,’ he recorded in Confessions. Of the climb on the lower reaches of Chogo Ri [or K2] the second highest mountain in the world, after Mount Everest, he commented: ‘The views are increasingly superb and the solitude was producing its beneficent results.  The utterly disproportionate miniature of man purges him of smug belief in himself as the final cause of nature.  The effect is it produces not humiliation but humility…’

Similarly, in A Phenomenology of Landscape anthropologist Christopher Tilley describes the landscape as having ancestral importance due to it being such an integral part of human development that it abounds with cultural meaning and symbolism. ‘Precisely because locales and their landscapes are drawn on in the day-to-day lives and encounters of individuals they possess powers.  The spirit of place may be held to reside in a landscape.’  Despite different locations giving a variety of explanations for the existence of this ‘spirit energy’, in a large number of instances the intelligent, magical entity simply develops from the colloquially named ‘spirit of place’ over a great deal of time.

He also observed: ‘There is an art of moving in the landscape, a right way (socially constrained) to move around in it and approach places and monuments.  Part of the sense of place is the action of approaching it from the ‘right’ (socially prescribed) direction.’  The method of approach is governed by a combination of place and time – both seasonal and social – while the ‘art’ is the simultaneous practice of meditation and ritualized operation.  ‘Flashes of memory, so to speak, illuminate the occasion and bestows an instinctive grasp of how to behave within a ritual or sacred landscape, and to recognize the type of magical energy to be encountered there.’

Mountains form the most spectacular natural creations on the planet and cover such a large amount of Earth’s landmass that they can be seen clearly from outer space.  Mountains are also a reminder that humans count for nothing in the greater scheme of things. They were formed by tectonic plate upheavals of such magnitude that the fossilised remains of prehistoric sea-creatures can be found on the peaks; in fact, many Himalayan rocks were originally sediments on the primordial Tethys Ocean floor. And more recently, in 1980, a violent eruption tore apart the snow-capped peak of Mount St Helens in the USA, reminding us of the powerful, and often devastating, internal workings of this planet.

Perhaps, however, it is easier to refer to Shinto, the indigenous religion of Japan for a universally accepted and comparable example of a ‘living’ nature belief. Essentially a compound of ancestor and nature worship, Shinto’s silent contemplation of a flower, stream, rock formation or sunset is, in itself, a normal, everyday act of private worship. As part of a national ritual, each year at the blossoming of the cherry trees, thousands of Japanese leave the city to enjoy the beauty of the short-lived flowering. Neither is it uncommon for them to spend a whole evening gazing at the moon; or sit for hours ‘listening to the stones grow’. Inconsiderately, some might think, Shinto shrines are usually to be found in remote locations of breathtaking natural beauty – with little thought for the convenience of the worshipper.

For the traditional Japanese there is no dividing line between the divine and human, since the forces that move in Nature, move in man according to Zen teaching:

“When one looks at it, one cannot see it:

When one listens for it, one cannot hear it:

However, when one uses it, it is inexhaustible.”

Even rocks are possessed of the divine spark and often form part of the intricate designs used to create those familiar Zen temple gardens for contemplation – reflecting the belief that the Buddha-nature is immanent not only in man, but in everything that exists, animate or inanimate.

Recognizing this instinctive feel for the divine spark of spirituality inherent in Nature is one of the fundamental abilities of those with a pagan mind set. A solitary walk by a rushing spring stream; the awesome thrill of an approaching thunderstorm in late summer; a stroll through the woods in autumn; or the first snow fall on the mountains are times for the working of natural magic. Nevertheless, these natural phenomena can make even the most blasé of people hanker for more of these feelings of elation that can grow from the experience of coming into contact with those elusive ‘earth mysteries’.

When referring to ‘earth mysteries’, it is also necessary to understand the difference between a ‘place of power’, and a sacred or historical site. For example, a large number of modern pagans treat any ancient earthworks as such, without any prior insight of its religious antecedents. As a traditional witch of my acquaintance once pointed out to her flock, such activities are on a par with worshipping at a castle moat or Neolithic flint quarry! Simply because something is old does not mean it has, or had, any religious or spiritual significance.

And as Philip Heselton explains in The Elements of Earth Mysteries, this is a living subject. ‘It is not just a study of things in the past, but is something now, in the present, and moreover something that involves our own participation: we ‘become’ involved.  The visiting of sites and our interaction with the landscape comes central to our belief.  What we are dealing with is a recognition that there are special places in the landscape that are in some way qualitatively special.  Whilst we may not be able to define this exactly, we know when we visit them that this is true.  Whether we can detect the energies present at such a site depends on many factors, particularly the cyclical nature of such energies in the landscape and in ourselves.’

Various cultures around the world maintain the importance of the sacredness of nature worship – often in a complex system of mountain and ancestor belief – at sites of revelation and inspiration. Mountains are often viewed as the source of a power which is to be awed and revered.  And perhaps we should all take the time to reflect on the words of Psalm 121:1 from the Old Testament in the King James Bible: ‘I will lift up mine eyes unto the hills, from whence cometh my help…’