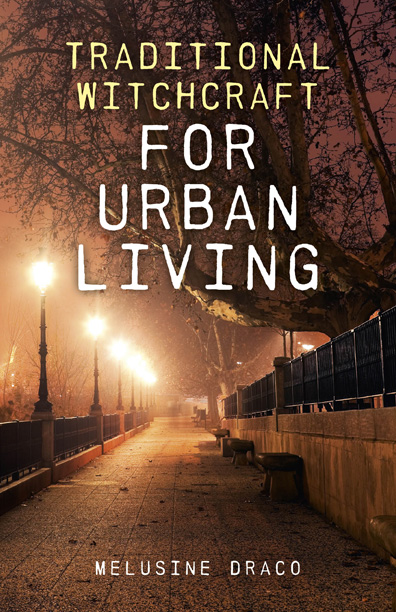 The first book in the series – Traditional Witchcraft for Urban Living – caters for the fact that most pagans live in urban environments and a witch often has to learn how to adapt and improvise in order to practice their Craft.

‘So how do we manage?’ a beginner may ask.  Answer: We get up close and personal. And we reject the textbook clichés of what is, and what is not, recommended witchcraft practice. We

do not follow stereotyping when it comes to when, where and how we perform our rituals simply because it may not be practically possible to follow the old traditional instructions to the letter.

The greatest problem a solitary urban witch faces is that the environment is not user-friendly when it comes to psychic activity, but then we don’t always have a choice of where we are going to live if someone else’s needs have to be catered for, too.  Urbanisation often provides on-the-spot facilities to make things easier on the domestic front but it cannot give the one thing that a witch needs most – privacy and spiritual elbow-room.

Traditional Witchcraft for Urban Living shows us how to acclimatise, adapt and improvise because any animal, plant or animal that is uprooted and transported to another environment

quickly learns to acclimatise if it is going to survive. Here we learn how to adapted to our surroundings and drawn on whatever material/energy there is to hand, even if it is not what we’ve been used to working with. We improvise by drawing on the existing knowledge and experience relating to magical techniques for confined spaces and interacting with the wildlife on our doorstep in the unofficial countryside.

This is a no-holds-barred approach to dealing with the constant barrage of psychic problems that confront the urban witch on a daily basis, and blends the Old Ways with practical contemporary practice.

I recently heard a presenter on Radio 4 say something like “Of course, there weren’t any real witches” as a throw-away line, as if assuming that the whole movement itself was something dreamt up by misogynistic religious nuts with pyres in need of human kindling. Yes, the genocidal witch-hunters hated the old religion and drove it to extinction. But there was actually an old religion there to destroy. Gradually, that movement is re-emerging, mostly in the form of Wicca. And what a wonderful thing it is – devoid of the dogmatic power-trips of monotheistic religions, immersed in science and folklore, and most of all promoting a tangible connection to the environment. Surely it is a religion for our times? Yet it treads warily. There is still much prejudice – even fear and loathing – aimed at witches, who are generally grossly misunderstood.

The ‘Traditional Witchcraft’ series provides varied information about what it means to be a practising witch in modern times. In places, it feels like a guide, or self-help book. But there is much more to it than that. What strikes me is the amount of science running through the book. To understand nature is to live as a part of nature, and ultimately to become one with its changing patterns and cycles, to synchronise one’s own psychic or magical energy with natural tidal forces and the elements. So a witch, like no other religious practitioner that I’m aware of, must study her environment carefully, and attune her life to it.  The learning is multi-disciplinary, and feels almost as if one was studying a textbook written by a poet. Yet the science collated in these pages is interesting, and pragmatic. Intermingled with the factual information is much about rituals, superstitions, treasures to collect for magical means and, of course, spell-casting. The witchcraft seems real enough – the engagement in the rituals and practice requiring as much faith as any other religion as to its efficacy.

Each witch finds their own path, and the sense here is mostly of a solitary journey rather than the work of a coven. Indeed, many times the author cautions the reader about how to conduct her craft in public spaces so as not to draw attention to herself. That wariness is still very much apparent, and after centuries of religious persecution perhaps that is wise counsel. Yet, the old religion is never far from the surface even in everyday life – you just have to know where to look.

Traditional Witchcraft [series] is like a Radio 4 feature about witches – not that one could ever imagine that happening, or imagine a witch providing ‘Thought for the Day’ on the Today programme! But it has that sense of quiet wonder about it, supported by education, knowledge and, above all, wisdom.

Traditional Witchcraft for Urban Living by Melusine Draco is published by Moon Books in paperback and e-book format at a special discounted price.  ISBN 978 1 84694 978 4 : 144 pages