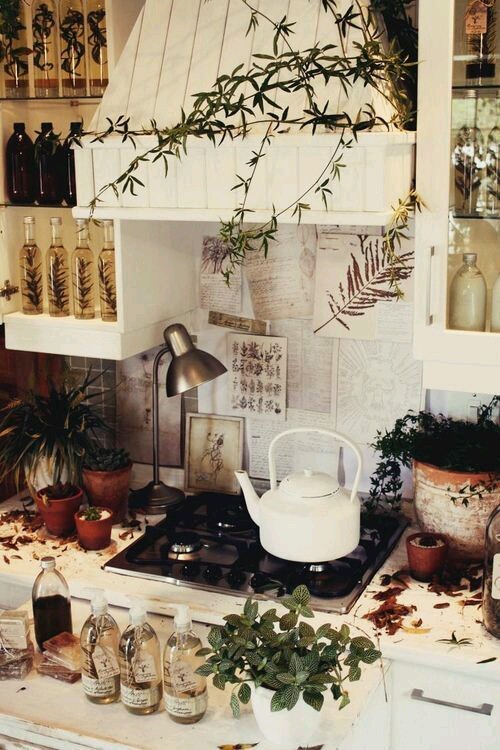 Unlike the wort-lore of traditional witchcraft, folk or domestic plant medicine is the everyday use of plants by ordinary people to cure minor wounds and ailments. Although there is a wealth of material from the classic herbals and herbalists recorded by the Benedictine monk Aelfric, the Physicians of Myddfai and the 17th century apothecary, physician and astrologer, Nicholas Culpeper, very little has been preserved of the common plant remedies used by our forebears.

Effective home remedies did not require any accompanying ritual to make them work and a countrywoman would merely pick the necessary plants from the garden or hedgerow to make a preparation for the family’s fever, or to treat a wound. A hot infusion made from diaphoretic and febrifugal herbs, such as yarrow, comfrey and cayenne, will increase perspiration and help to reduce a high fever. While towards the end of WWI, the British government used tons of sphagnum moss as surgical dressing, placed directly on to wounds when the demand for cotton bandages could not be met. Fortunately this folk remedy had not faded from memory and is still used in some rural areas.

Similarly, feverfew has been used since the Middle Ages for its analgesic properties. Culpeper recommended the herb for ‘all pains in the head’ and current research has proven the efficacy of feverfew in the relieving of migraines and headaches when taken as a tea.

The common ‘weed’ plantain has long been recognized as an excellent restorative and tonic for all forms of respiratory congestions – nasal catarrh, bronchitis, sinusitis and middle ear infections. The plant’s demulcent qualities make it useful in an infusion for painful urination. As a lotion, plantain calms the irritation and itching of insect bites, stings and skin irritations; and as a disinfectant and styptic for wounds and how many of us automatically search for a dock leaf after a close encounter with a stinging nettle?

With all its magical connotations and fairy connections, the elder has long been known as the ‘poor man’s medicine chest’ because its flowers and berries have so many uses in treating respiratory infections and fevers. The leaves make a useful ointment for bruises, sprains and wounds, while an ointment made from the flowers is excellent for chilblains. The inner bark has a history of use as a purgative dating back to the time of Hippocrates, and we must not forget the ‘tonic’ of elderflower champagne and elderberry wine!

Through the daily life of ordinary country people, the use of folk medicine had been preserved with remarkable accuracy from one generation to another up to the early 20th century. As a result of two world wars and with the large-scale dispersal of country people to the towns, however, the need for folk medicine diminished. The old people who remained no longer had anyone left to whom they could pass this age-old wisdom and so it died out for lack of interest.

Today there is a renewed interest in natural medicine and the old remedies are being researched by a joint project called Ethnomedica [1990s Kew Gardens]. Involving medical herbalists and botanists, their aim is to gather information about country remedies throughout Britain.