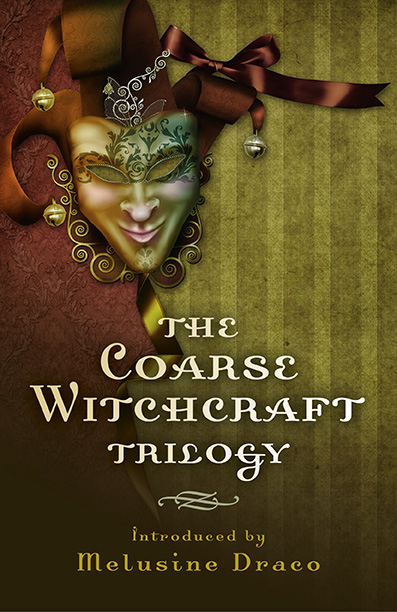 The Coarse Witchcraft Trilogy by Rupert Percy and Gabrielle Sidonie

Every book has a story behind the story of how it came to be written. It may be about a life-long passion, a personal journey, the need to share an experience or knowledge. It may have been fermenting in the brain for years, or sprung fully formed from a blinding epiphany.  Whether it be fact or fiction, sometimes the story behind the story is almost as interesting as the published book itself …

The Coarse Witchcraft Trilogy  by Rupert Percy and Gabrielle Sodinie

As I’ve often said before, Coarse Witchcraft is like Marmite – you either love or hate it. In its own way, however, I think the Coarse Witchcraft Trilogy represents a small but important capsule of Craft history that we have been lucky enough to preserve for the next generation of witches. But it very nearly didn’t happen …

Fans of the Coarse Witchcraft series are aware of the story behind the trilogy. How the original authors were unhappy with the proposed ideas for publishing the first book as humour instead of the polemic typescript they had originally proposed. They finally agreed for the text to be given to me (as a fellow Old Crafter) to ghost-write and Coarse Witchcraft: Craft Working was duly published by ignotus press – provoking more good natured laughter about British witchcraft than we could have expected in our wildest dreams. I also unashamedly nicked the title idea from an old chum of mine, Michael Green, who was the author of ‘The Art of Coarse …’ series.

I think the nicest thing that was said about the first in the series came from esoteric author and another long-time chum, Alan Richardson, who said of the book: ‘Coarse Witchcraft made me laugh out loud in more than a few places. In fact, I think it is the first book of its kind; although it pokes fun at modern excesses and can laugh at itself, it still manages to teach the real stuff at a very high level.’

There was almost enough material left from the first book to launch a second: Coarse Witchcraft 2: Carry On Crafting, with plans for a third. It was dedicated to all those Crafters who believe that reverence should be tempered with mirth and merriment – and was as equally well received as the first. For reasons that will become apparent, the third (and last) title has been a long time in the writing. Coarse Witchcraft 3: Cold Comfort Coven is written in the same vein as the previous books, and in its own way continues the unexpected, but true, story of the Coven from the numerous notes supplied by, and lengthy conversations with, the original members.

Despite the popularity of the books, however, the original authors decided to hand all copyright back to the ghost-writer who had created the series (with the proviso that the real names of the characters should never be revealed), and retire from the scene.  We have kept to our word but this still doesn’t stop people trying to hunt them down and in my hearing (not knowing of my connection to the books) have claimed to have worked with the group, or personally knowing who various characters are. The first book revealed the attitudes of the 1980s when Craft antecedents were much more rigidly scrutinised than they are now; the second book was a product of the 1990s reflecting the more relaxed approach between the various pagan factions; while the third was a product of the 2000s to close the Circle, as it were.