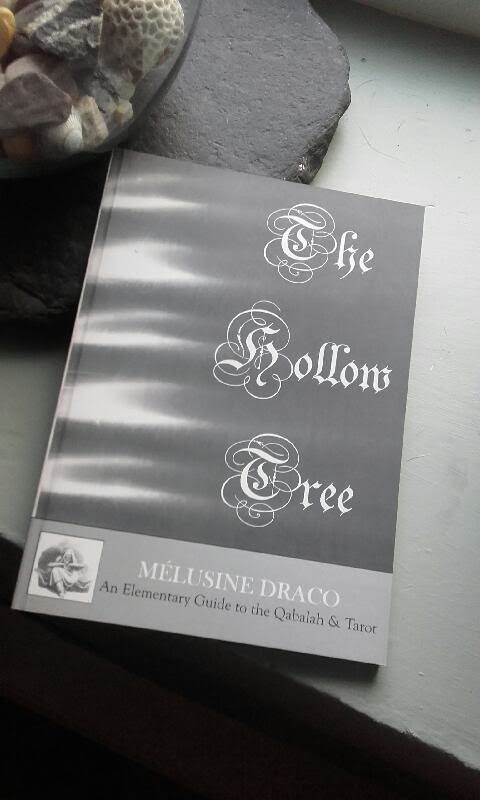 The Hollow Tree by Melusine Draco

The Hollow Tree: An Elementary Guide to the Qabalah & Tarot was first published in workbook format by Corvus Books in 1999 with an extended paperback version in 2002.  And like The Dictionary of Magic & Mystery compiled from my own extensive notes to help me find my own way around these mutually fascinating subjects.  Both magical disciplines are a series of overlays which can be almost impenetrable to the newcomer unless there is a key …

The problem in understanding the workings of the Qabalah lies in the largely incomprehensible and exhaustive list of publications available to the beginner which automatically begs the question:  “Where do I start?”

Firstly, I discovered it was necessary to understand the origins and antecedents of both the Tarot and Qabalah as two completely different systems that had undergone multiple translations, adaptations, additions and changes across the centuries.  The Qabalistic Tree of Life has been around for well over 2000 years, representing an analogy for the Absolute, the Universe, Man and Everything — its very roots dig deep into the molten core of the Earth, while its uppermost branches reach out to infinity.  And vice versa.

The ‘magical’ version familiar to 20th century occultists is that expanded and revised by Eliphas Levi in the 19th century, and by Dion Fortune and Aleister Crowley in the 20th.  The ‘Tree’ finally metamorphosed into a mystical step-ladder by which means the magician could unite himself with, or become the One, by rising up through the spheres, scaling the ladder of the ten sephiroth to reach God.  It could also represent an over-all blue-print of how the Universe came into being, in a cosmic game of ‘Snakes and Ladders’. Crowley maintained that every student should compile their own Tree as this is the most effective and individualistic method of understanding much of what passes for ritual magic in most of the modern Traditions.  The Hollow Tree strips all this highfaluting down to the barest framework, so the beginner can re-construct his or her own Qabalah without getting bogged down with the intricacies of weighty, unfamiliar or alien concepts.

A Word of Warning: Reading this book will not make you a Qabalist

Neither will it give you the ability to go hurtling through the cosmos, taking all in your stride.  All it will give you is the means to find your way around the Tree and enable you to  devise your  own system using those deities which are pertinent to your own Tradition, without archangels and suchlike getting in the way.  Make no mistake, however, this is basic, elementary training at beginner level.

Like most magical systems, however, there is rarely one true answer to any question and for the purpose of this book, I used Crowley’s system, because of the familiarity with the ‘Atus of Tahuti’ Tarot deck and its accompanying Book of Thoth.  For the ritual magician who is not happy with the Crowley influence, however, there is the Golden Dawn Tarot, while other Traditions can usually find another compatible deck with which they feel more at ease.

Copies of the original illustrated paperback version of The Hollow Tree: An Elementary Guide to the Qabalah & Tarot are still available from Ignotus Press UK – price £9.99 including postage.  ISBN: 0 9522689 8 1. For more information email: ignotuspressuk@gmail.com or melusinedraco777@gmail.com